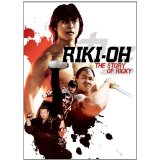 Riki-Oh: The Story Of Ricky (Region 1) - Nam, Simon
Releasedatum: 1 januari 2012
A practitioner of the mystical kung-fu style known as Qigong,
Ricky is invincible, has superhuman strength, and can virtually
withstand all pain. He uses his martial arts skills to clean up
the system after being incarcerated in a prison run by corrupt
officials. This leads to ill-fated attempts by others to subdue
him, which end up being extremely gory and over-the-top.