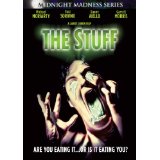 Somebody out there wants everyone to eat a new dessert, sort of like yogurt but also a parasite. Stars Michael Moriarty, Andrea Marcovicci, Paul Sorvino

A new ice cream-like product becomes immensely popular, taking the entire country by storm. Finding their livelihood threatened, a group of ice cream moguls employ an industrial saboteur (Moriarty) to uncover the creamy sensation's ultrasecret formula. Teamed with a fallen cookie entrepreneur, he learns that, although it doesn't have any calories, the stuff possesses one highly undesirable side-effect; it turns people into murderous zombies. With time running out, the two must wrest the world from the grip of this deadly delight. High camp humor is employed to the extreme in this schlock classic from genre guru Cohen.