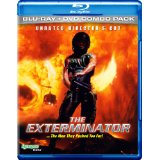 When his friend is paralysed in a gang attack Vietnam veteran John Eastland decides to wreak revenge upon anyone who crosses his path. He becomes a hero to the public with his no-nonsense approach to law enforcement, but the police believe him to be an unstable psychopath, capable of untold murder and mayhem.