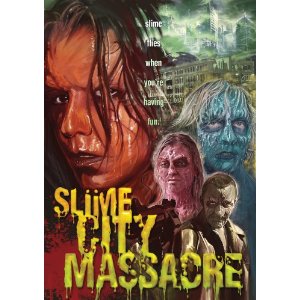 Slime City Massacre (Region 1) - Lamberson, Gregory
Releasedatum: 10 mei 2011
A dirty bomb has decimated New York City s financial district and reduced midtown to a post-apocalyptic nightmare. The neighborhood known as Slime City has been evacuated, except for the homeless, and in the ruins of a soup kitchen four squatters discover a supply of food that transforms them into hideous slime creatures, driven to murder! Meanwhile, a greedy developer who has set his sights on Slime City
hires a team of mercenaries to wipe out the creatures. It s a battle royale between the Slime Heads, the mercenaries, and bloodthirsty mutant cannibals!