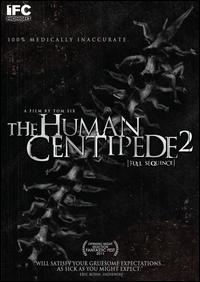 The first film’s evil Dr. Heiter has inspired a real-life protege, the sickly, disturbed security guard Martin (Laurence R. Harvey), who repeatedly watches (and even gets a sexual thrill from) Six’s movie. Martin decides to re-create the sick feat of the original film – in which Heiter sewed three kidnap victims together to form one long, continuous digestive tract. Martin plans to up the ante for his piece de resistance: a 12-person human centipede of his own. Ashlynn Yennie, star of The Human Centipede (First Sequence), returns as herself, an actress lured into this no-holds-barred assault on the senses that pushes the limits of taste and gastrointestinal endurance.”