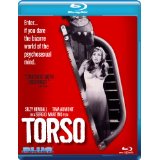 One Day She Met A Man Who Loved Beautiful Women...
BUT NOT ALL IN ONE PIECE!

Directed by Sergio Martino (MOUNTAIN OF THE CANNIBAL GOD) and starring Suzy Kendall (THE BIRD WITH THE CRYSTAL PLUMAGE) and Tina Aumont (SALON KITTY), this Euro Horror chiller was originally released in America with much of its controversial violence removed by censors. Now freshly transferred in thrilling High Definition from the original negative, TORSO is presented in both its Uncensored English Version and Full-Length Italian Director's Cut for the first time ever!