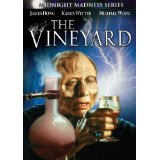 Dr. Elson Po is a man obsessed with the forbidden secrets of immortality. An expert in black magic, he poses as a film producer to lure young victims to his remote island. It soon becomes clear that the island isn't big enough for both young and old as Po uses his victims' blood to hang onto his youthful vitality. When one young man, Jeremy, discovers the truth about his host, he leads the survivors on a desperate fight for survival.