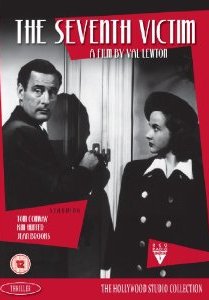 Seventh Victim R2 (Uk Import) -
Releasedatum: 25 oktober 2010
Mary (Kim Hunter) travels to New York to discover the reason for her sister Jacqueline s sudden disappearance. The cosmetics shop that Jacqueline (Jean Brooks) owned has been sold and her rented room is empty, save for a solitary chair and a noose. Suspecting that her sister is under the influence of Satanists, Mary hires a private detective to stakeout the shop at night, but she then discovers that he has been murdered. Dr Louis Judd (Tom Conway) contacts Mary to explain that he is a psychiatrist and that Jacqueline is under his care because she is mentally ill. But when Jacqueline vanishes again, it becomes clear to Mary that she in the clutches of a satanic cult whose penalty for revealing anything about themselves is death. Six people have already been murdered...will Jacqueline become the seventh victim?