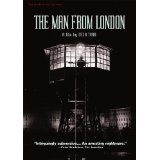 Lonely railway worker Maloin leads a simple, humdrum life with his teenage daughter and high-strung wife (superbly played by Academy Award-winning actress Tilda Swinton) at the edge of an infinite sea. He barely notices the world around him, and has already accepted its slow and inevitable deterioration. His inner life is suddenly thrown into chaos after he stumbles upon a deadly business transaction that leaves him with a money-stuffed suitcase and a guilty conscious for a crime he didn t commit. Another existential dazzler from one of cinema s most stunning and austere filmmakers, Bela Tarr s The Man From London is a breathtaking exploration of man s indestructible desire for freedom and happiness.