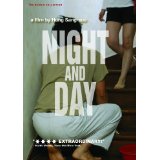 A married man in his early forties, Seong-nam is an award-winning painter who, after getting busted for smoking pot with an American exchange student in Seoul, impulsively flees to Paris. Crashing in a dingy hostel run by a fellow Korean and unable to speak a lick of French, he finds himself wandering aimlessly around Paris, trapped in both his art and life. After a chance and comically sad encounter with an old flame, he eventually stumbles in to the emotional lives of two very different but beautiful Korean expats with surprising results. Sharp and deeply funny, Night and Day finds internationally acclaimed Korean director Hong Sang-soo working at the height of his powers and creating his most entertainingly Rohmer-esque film to date.