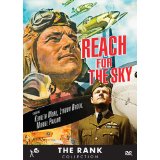 "Redefining new levels of stiff upper 'lippedness,' Kenneth More excels in this reverent biography of World War II fighter ace Douglas Bader. The film is superbly mounted and the aerial battles are exciting, it's a bit creaky in places yet holds up remarkably well, due in part to Gilbert's subtle direction and the convincing acting performances." - Britmovie.co.uk

One of the many inspirational true stories told about WWII, this is the story of Douglas Bader, an undauntable character who was involved in an accident which cost him both of his legs. Despite this, he became a WWII squadron commander and was a hero during the Battle of Britain. Shot down over France and held prisoner by the Germans, he still survived and returned to England leading 3,000 planes over London in a victory flight.