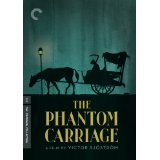 Phantom Carriage, The (Criterion Collection Region 1) - Sjostrom, Victor
Releasedatum: 27 september 2011
The last person to die on New Year’s Eve before the clock strikes twelve is doomed to take the reins of Death’s chariot and work tirelessly collecting fresh souls for the next year. So says the legend that drives The Phantom Carriage (Körkarlen), directed by the father of Swedish cinema, Victor Sjöström. The story, based on a novel by Nobel Prize winner Selma Lagerlöf, concerns an alcoholic, abusive ne’er-do-well (Sjöström himself) who is shown the error of his ways, and the pure-of-heart Salvation Army sister who believes in his redemption. This extraordinarily rich and innovative silent classic (which inspired Ingmar Bergman to make movies) is a Dickensian ghost story and a deeply moving morality tale, as well as a showcase for groundbreaking special effects.
New digital restoration, done in collaboration with the Archival Film Collections of the Swedish Film Institute
Two scores, one by Swedish composer Matti Bye and the other by the experimental duo KTL
Audio commentary featuring film historian Casper Tybjerg
Interview with Ingmar Bergman, excerpted from the 1981 documentary Victor Sjöström: A Portrait, by Gösta Werner
The Bergman Connection, an original visual essay by film historian and Bergman scholar Peter Cowie on the film’s influence on Bergman
Footage of the construction of the Räsunda studio where The Phantom Carriage was the inaugural production
New and improved English subtitle translation
PLUS: A booklet featuring an essay by screenwriter and filmmaker Paul Mayersberg