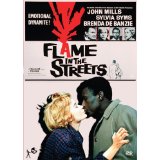 A grittier, British inspiration to Stanley Kramer s Oscar winning Guess Who s Coming To Dinner. Set amidst the backdrop of working class London, Flame in the Streets takes a hard look at racial prejudice. Ted Willis adapted his own successful stage play, Hot Summer Night, for the big-screen and director Roy Baker (A Night to Remember) pulled no punches and bruised many a liberal s sensibilities in delivering what he termed a harsh picture. John Mills plays a liberal-minded union leader in a London factory, who fights against the discrimination that is rampant in his multiracial workforce. His actions prevent a bitter strike, when the union becomes outraged over the promotion of a Jamaican to a much higher position in the factory. His victory is sweet but short, as he now turns his attention to home where he must fight his own deeper prejudices, when he finds his daughter is planning to marry a Jamaican teacher.