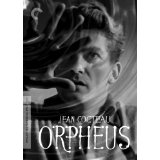 This 1950 update of the Orphic myth by Jean Cocteau (Beauty and the Beast) depicts a famous poet (Jean Marais) scorned by the Left Bank youth, and his love for both his wife Eurydice (Marie Déa) and a mysterious princess (Maria Casarès). Seeking inspiration, the poet follows the princess from the world of the living to the land of the dead through Cocteau’s famous mirrored portal. Orpheus represents the legendary Cocteau at the height of his abilities for peerless visual poetry and dreamlike storytelling.

Jean Cocteau: Autobiography of an Unknown, a 1984 feature-length documentary

40 Minutes with Jean Cocteau, an interview with the director from 1957

In Search of Jazz, a 1956 interview with Cocteau on the use of jazz in the film