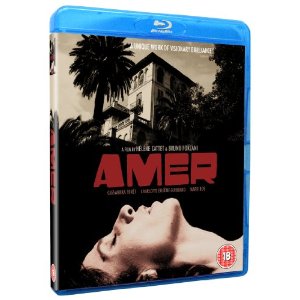 The film was chalked up by many as an homage to the gory European gialli of the 1960s and 1970s, but it's also influenced heavily by the narratively cryptic surrealism of directors such as David Lynch. Directors Bruno Forzani and Helene Cattet undertake an episodic approach by dividing the material into three thematically linked segments. In the first, a young girl is at home as her grandfather dies and her grandmother begins performing a series of bizarre rituals designed to either bring him back to life or ease his passage to the next world; as this is happening, the girl becomes aware that her parents are making love elsewhere in the house. Years later, a teenage girl goes into town with her mother to run some errands, comes face to face with the power of her sexuality, and learns how she can use her allure to change the behaviour of men. In the final segment, an adult woman returns to the house where she grew up, which has fallen into disrepair -- and discovers that she may not be alone. AMER was the first feature-length project from directors Cattet and Forzani.