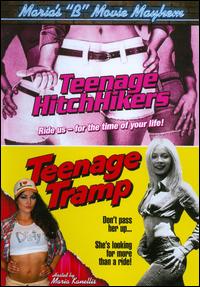 Maria Kanellis a former WWE Diva WWE 2008 Diva of the year cover of Playboy magazine April 2008 voted #53 on 100 sexiest women by FHM Magazine celebrity contestant on CELEBRITY APPRENTICE with Donald Trump! She now tackles a new deadly arena hosting B films! This double bill of a drive-in classics! The 1975 classic TEENAGE HITCHHIKERS which was one of the films featured in Quentin Tarantino's QT fest. Thefilm features Sandra Cassell star of LAST HOUSE ON THE LEFT play a loveable hitchhikers meeting odd and ical people in east coast. Also on the same card and first time on home video is TEENAGE TRAMP which features Alisha Fontaine as a mixed up girl who goes to the west coast to meet up with her older sister and cause havoc as her drug addict boyfriend and his cult follows her. Two drive-in classic as Maria host this massacre!Special Features: Maria Kanellis hosting the beginning and end of the film.