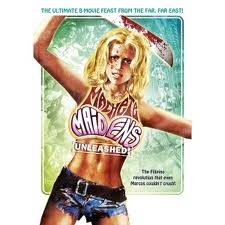 Buxom beauties! Bizarre creatures! Gratuitous violence! To the exploitation filmmakers of the 1970s and 1980s there was no stunt too risky, no story too ridiculous, and no clothing that could not be removed in the name of mass entertainment. The name of the game was to move fast and cheap and to producers big and small the Philippines was the Promised Land, the Wild East of filmmaking where American producers were welcomed with open arms by an otherwise oppressive government and safety regulations were but a distant rumor from far off lands. With MACHETE MAIDENS UNLEASHED acclaimed filmmaker Mark Hartley (NOT QUITE HOLLYWOOD) dives head first into the hidden history of the American backed Filipino production boom. Filled with outrageous footage from this lost era and firsthand accounts from Roger Corman, Joe Dante, John Landis, Jack Hill and a host of others who experienced the madness live and in person MACHETE MAIDENS UNLEASHED is a delirious ride through one of the most exhilarating periods of film history.

In the 1960s and 70s, drive-in movie theaters and big city grindhouses were eager to book the wildest and most action-packed fare they could find, and low-budget producers were always on the lookout for something unique to offer their viewers. Many of them found it in the Philippines, a country full of exotic locations, cooperative officials and folks willing to work cheap. Local producer Eddie Romero began exporting his cut-rate horror and crime pictures to American distributors in the 60s, and before long U.S. filmmakers were traveling there to shoot crazed jungle epics, women in prison thrillers, bloody horror stories and violent wartime dramas. It certainly helped that Philippine extras and technicians would work hard for low pay, and that local stuntmen didn't seem to worry much about risking their necks for a good shot; as one producer put it, "Human life was cheap, film was cheap -- it was a great place to shoot a movie!" Filmmaker Mark Hartley, who shared the crazed true story of the Australian exploitation movie scene in his documentary NOT QUITE HOLLYWOOD, shares the inside scoop on the wild and wooly world of filmmaking in the Philippines in the 1960s and 70s in MACHETE MAIDENS UNLEASHED! Featuring interviews with Gloria Hendry, Colleen Camp, Sid Haig, R. Lee Ermey, Roger Corman, Joe Dante, Allan Arkush and many more eyewitnesses to the madness of movie making in the Philippine jungles, MACHETE MAIDENS UNLEASHED! was an official selection at the 2010 Toronto International Film Festival.