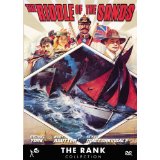 Radioactive - F4ur
Releasedatum: 17 april 2015
A young British yachtsman (MacCorkindale) is sailing off the north coast of Germany in 1901, when he stumbles upon a plot to invade England. The young sailor enlists the aid of an old chum (York), who also works in the Foreign Office, and together the two English gents turn amateur sleuths and embark on a daring adventure to save Britain from catastrophe at the hands of the German military and Kaiser Wilhelm himself! Based on the Erskine Childers novel, considered the prototype of the modern day spy thriller.