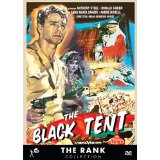 Gordon Macrae - Gordon Macrae It's Magic - A Centen
Releasedatum: 1 mei 2021
In the final grim days of the mid-1942 British Retreat through Libya, a young British Army officer Captain David Holland was posted as missing and later presumed dead. His country mansion and great estates in England inherited by his younger brother Charles. Informed that he may still be alive, Charles Holland sets out in search of his older brother only to uncover the great mystery of David's life, love and ultimate honor. Filmed on location in Libya this classic tale of post war heroism provides an interesting and timely glimpse into the Bedouin culture and the struggle to reconcile life after the war.